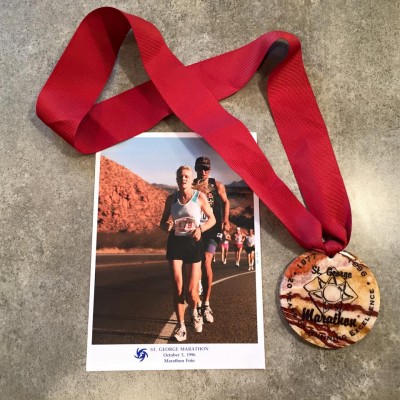 There are so many great marathons in Utah, it was really hard to narrow it down, but I’ve noticed there are some top features that really do set some races apart from others. The marathons that have been around for a while are usually the ones that have things in common that runners really like and keep them coming back year after year. Here are the top picks in chronological order among local Utahans.

The Salt Lake Marathon has had its fair share of twists and turns over the years with course and management changes since its beginnings in 2004, but the race has attracted some of America’s top quality racers. “Since acquiring this race just before last year’s event, Life Time Fitness has received great feedback, especially in regards to the new marathon route,” says Jennifer Nelson, one of the race organizers. “Feedback has been that it is a beautiful, challenging course.” The course takes you through some of the most iconic parts of the city starting at the Olympic Legacy Bridge at the University of Utah, the site of the 2002 Winter Olympic Athlete Village, and past the towering Wasatch Mountains, through Memory Grove, Sugar House and Liberty Parks until it culminates at the finish line in the heart of downtown at Washington Square. Last year, nearly 7,000 participants toured this Boston Qualifier course. It is also certified by USA Track & Field (USATF) and sanctioned through the Road Runners Club of America (RRCA) and named a Utah State Half Marathon Championship race for the second year in a row. Divisions include open, masters and 18 age groups. They have also partnered with the Huntsman Hometown Heroes as the primary charity affiliate. They also offer a Full and Half Marathon,5K, Bike Tour (cyclists take to the closed marathon course before the runners do), Kid’s Marathon around the City Building (1K), and new this year, a 10K Skate. To learn more visit SaltLakeCityMarathon.com

Ogden Marathon in May

Locals know this race fills up fast, especially the half, so if you want to get in this event you better be ready when the registration opens. Not only is it well organized but it is a beautiful route (are you noticing a tread with good races and routes?). The Ogden Marathon was voted one of the “Top 10 Marathons in the World” by the Runner’s World Readers Poll in January 2010 and it is easy to see why. “Coined ‘Utah’s Spring Run Off’ the Zions Bank Ogden Marathon is one of the most scenic Boston Marathon Qualifiers in the country,” states race organizer Mike McBride. More recently, February 2015, Shape.com indicated that this event was the “5th Best Marathon in the Country for Beginning Marathon Runners.” So, if you are looking for a first time marathon, this is it. The course is slightly downhill with almost no uphill so it’s a perfect environment for new personal records. The Ogden Marathon is one of the most well supported races in Utah with over 1,800 volunteers on the course on race day! Participants rave about the well-executed planning and great communication this event provides. Over the 15 year history of the event; from the first event in 2001 with 650 participants, it has passed ownership to the GOAL Foundation. This year they will have a combination of over 10,000 runners made up of the full, half, relay, 5K and kids K events! Wow, I can see why they need all those volunteers! The GOAL Foundation really does aim to inspire others to “Get Out And Live!” To learn more visit OgdenMarathon.com

If you are looking for a race with amazing scenery, you won’t want to miss the views of Deer Creek, the Provo River, Bridal Veil Falls and Provo Canyon that you can experience with the Utah Valley Marathon. It’s a beautiful course, with wonderful volunteer support! These are a few of the many reasons that this race was named the top 10 race in the country by Runner’s World Magazine. It is also a fast course. The Race Director, Hyrum Oaks says, “We commonly hear that people set their fastest times on our course, and the proof can be heard with our PR bell being constantly rung in our finish area after people set their personal best times.” They also give out Boston Qualifier shirts to runners that qualify on the course (how cool is that?). To top it off they will have Ryan Hall (the American record holder for the half marathon) coming to speak at the expo this year. It is no wonder that the race has grown from 240 participants in 2008 to over 7,000. This year they have also added a K9 Dash (5K) on Friday evening, the night before the main event. To learn more visit UtahValleyMarathon.com

Top of Utah Marathon in Sept

Living in Logan for some time as I attended Utah State University I can attest to the beauty of Cache Valley which is the location of the Top of Utah Marathon. The Marathon starts at Hardware Ranch, in the Wasatch Mountain just southeast of Logan and winds down the Blacksmith Fork Canyon’s gradual decline and then through small neighboring communities to the finish at Merlin Olsen Park in Logan. The course is a USAT&F-certified Boston Qualifier and has a net elevation drop of 1,045 feet and is getting great reviews. The race is organized well with great support and volunteers. To learn more visit TopOfUtahMarathon.com

Having been around for so long the St. George Marathon makes the list. This will be the 39th year of the event and holds a special meaning to me personally as it was the first marathon I ever ran back in 1996 where I qualified for the Boston Marathon. This race is especially known for being downhill and a beautiful course and I would echo many of the comments made by fellow racers; “Best organization in any marathon I’ve ran,” “Amazing supporters”, “ I love the way it is put together, the expo, the energy from the volunteers and the staff.” The event has reached such numbers that it now offers a lottery to get in. If you’re lucky enough to have your name drawn out you can experience this great course for yourself. All the amazing things I experienced many years ago are still in place, like the fires at the starting area, the great finish support and volunteer help as well as a great community feel. This race truly has a great hometown feel and there is a real sense of community when you are part of it. I don’t doubt it will be around for many more years to come. From its meager start in 1997 with 43 racers to it now nearly 7,700 that toed the line in 2014; It is no wonder they were voted the most organized marathon in the nation by Runner’s World Magazine in 2010. You simply can’t have an event continue for so long without being well organized. To learn more visit StGeorgeMarathon.com

Deseret News Classic Marathon – This event is well organized and is the oldest running marathon in Utah holding the first event in 1970. The prize money attracts some of the fastest runners in the country. If you are looking for good competition, this is a great event. DeseretNewsClassic.com

Big Cottonwood Marathon – So many people rave about this beautiful downhill route. If you are looking for some amazing scenery, you’ll want to check out this event. RunRevel.com

About the Author: Coach Lora Erickson aka “Blonde Runner” is a certified running and triathlon coach with over 30 years of athletic experience. She loves to work with all levels of athletes and trains people for all distances, in person as well as on-line. She also offers community health classes & corporate motivational lectures. To learn more visit BlondeRunner.com