Book Review: As The Crow Flies by Craig “Crowie” Alexander 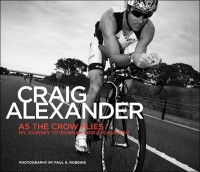 This book and photo journal follows professional athlete Craig “Crowie” Alexander on his journey through a history making 2011 season where he broke a 15-year course record to win his third Ironman World Championships and pulled a “double” win taking the 70.3 World Championships in the same year.  This is an amazing accomplishment.  Craig Alexander, a five-time triathlon world champion has now joined the ranks of all time greats like Dave Scott, Mark Allen and Peter Reid.  This book is a great read; chalk full of photos, tips and stories that help you see the inside of a professional athlete’s life.  The pictures taken by highly recognized sports photographer, Paul K. Robbins, really capture the story.

As an athlete with four children nearly the same age as Craig, I seemed to really relate to a lot of the way he views his life and training.  Triathlon is truly a way of life.  I loved how he includes his family in his racing and training and makes sure he stays grounded.  He’s a family man.  There are several pictures of him with his family and I particularly love the one where his two children are riding their bikes with him on his recovery run (great idea!).  He likes to make sure that his children and wife know that they are important to him.  I also learned that he spends half the year in United States training and the other half in Australia and takes his family with him.  They are very much a part of what he is doing and support him 100%.

The book also has a lot of training tips and I love how Craig reminds us that training isn’t all about science but it’s about “feel” and becoming attuned to our bodies.  A lot of his workouts are based on perceived exertion rather than just science and looks for cues and internal feedback.  I know for me, after 27 years of competing “feel” is something I utilize in a lot of my workouts too.  It’s nice to see such an advanced athlete not get caught up in all the numbers and really balance both in his training.  I agree with his “common sense approach to nutrition” and “everything in moderation” philosophy.  He really seems to be balanced.

He also talks about not having to train in a high-tech or fancy environment and is satisfied with less adequate accommodations.  I would echo his words, “old school still works.”  And if it’s good enough for Rocky Balboa– why shouldn’t it work for us.  So true!  Success is about being willing to put the work and training in and be dedicated to the sport.  It’s easy to see Craig’s commitment to training and his sponsors through out the book.  I love how he opens up and shares some of his struggles with illness and training blocks along with pivotal moments in his training and sponsorship changes.  He is clearly the versatile athlete that he strives to be and has a positive “can-do” approach.  He understands that the final outcome of a race is “always determined by how you put the three disciplines together.”

To get your own copy of the book visit:  As The Crow Flies by Craig Alexander

Velo Press puts out a lot of other great books for athletes.  Click here to take a look.

If you are interested, here are the dates/places of Craig Alexander’s 2012 As the Crow Flies U.S. Book Tour: