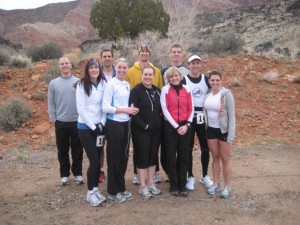 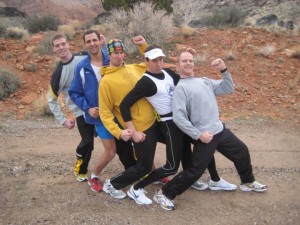 Recently I ran the Lake to Lake 50 mile team relay. The team relay consisting of 5 people each running any two legs of the route from one lake to another lake in Southern Utah (Gunlock to Sand Hollow Reservoir). Two teams were put together from member’s of the South Davis Road Runners. One men’s team (South Davis Road Runners Men’s Racing Team) and one women’s team (Ladies of the Lake).

It was a little chilly at the start at Gunlock Reservoir and after a few team pictures the race was off with 95 teams competing (this was nearly triple the number of the inaugural race last year). Natalie started for us with a steady 6 mile run along a paved road through Gunlock State Park. Jim started for the men. 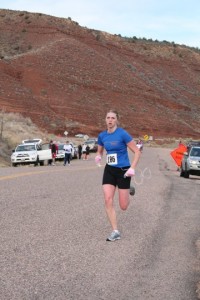 The route is as beautiful as I remember it from last year with red dirt, cactus, and twisted trees. I ran the next leg through the Shiviwits Indian Reservation and was pleased to have pasted 5 people in the first mile. This kept me motivated. By now it was starting to get a bit hot (at the start of my leg it was 40 degrees and warmed up 10 degrees by the end) and just when I wanted to slow down a group of road cyclists approached me from the front and as they passed me a lady yelled, “Hey there’s Lora.”  I was delighted to recognize a a former college teammate that run with me at Utah State now training for triathlons. I happily waved and must admit I kinda wanted to hop on my road bike and join them (My friend lives in St. George and I must say I am a little jealous to know she gets to ride that beautiful route all of the time!) This was just the distraction I needed to refocus and motivate me. I used my Garmin to keep my pace as steady as I could enjoying the nice steady downhills and working the uphills and I was able to clock a few sub 6:30 miles over the 5 plus mile distance. All in all I was able to pass 13 people (“road kill”). I passed off to Suzanne with a high-five and the team traveled along the road cheering each of our runners on and giving support. 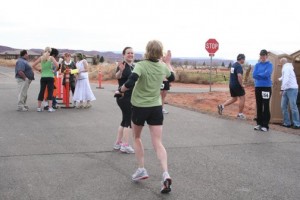 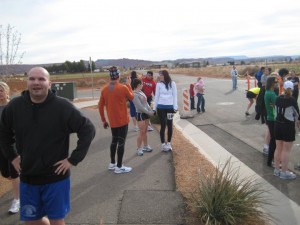 The route travels through trails, over wooden bridges, farmland, past cows and Llama’s, through neighborhoods and over red dirt roads with huge clumps of deep maroon lava rocks practically buried in the red soil. It is a truly amazing route, this is what I call living!  The men just torn up the route at a great pace.  Go team! 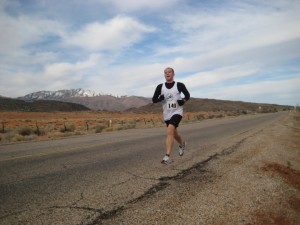 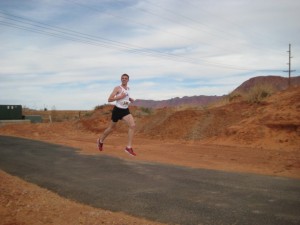 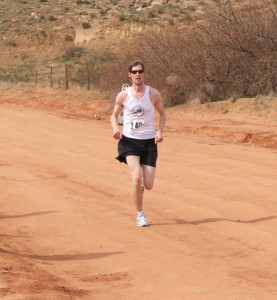 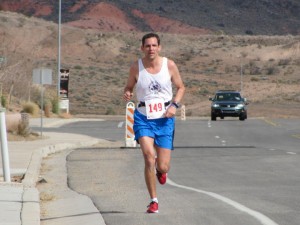 The women’s team hit a bit of car trouble at one to the exchanges, but got a jump from some nice guys in a silver Jeep and was back on our way…we learned not to leave the car doors open and lights on without the car running as it drains the battery. By the eighth leg, it was getting pretty windy and warm.  That particular leg ended with a huge uphill dirt climb, so we stopped and supported runners with water until our runner, Lisa came. After giving her support we rushed to the next exchange and she nearly beat us to it finishing strong up the hill. I ran the ninth leg called the “Dirty Climber” several hours after Jim for the men’s team cranked through it. 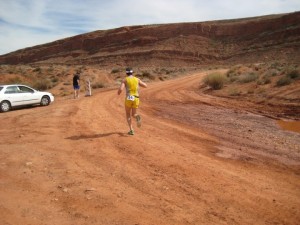 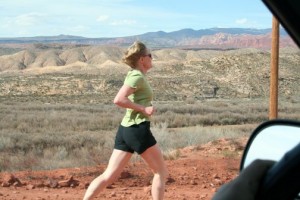 It is just what it sounds like “dirty climber” and is considered the hardest number “10” level leg. By this time the wind had picked up significantly and I choose to wear my sunglasses in hopes to keep some of the dirt out of my eyes. It worked for the most part. I tried to muscle through the fierce head wind up the climbs and pushed the pace to make up ground on the short downhills and somewhat flat areas. I manage to clock my fastest pace under 5 min miles on one of the downhills over the 4 and a 1/3 mile stretch which ended on a 16% incline ¾ mile hill/mountain. Ouch – but it was all good as I still managed to pass 5 people (road kill) – even with great distances between runners. I passed off to the last runner Juliann and we cheered her through the windy and cold finish running in together. 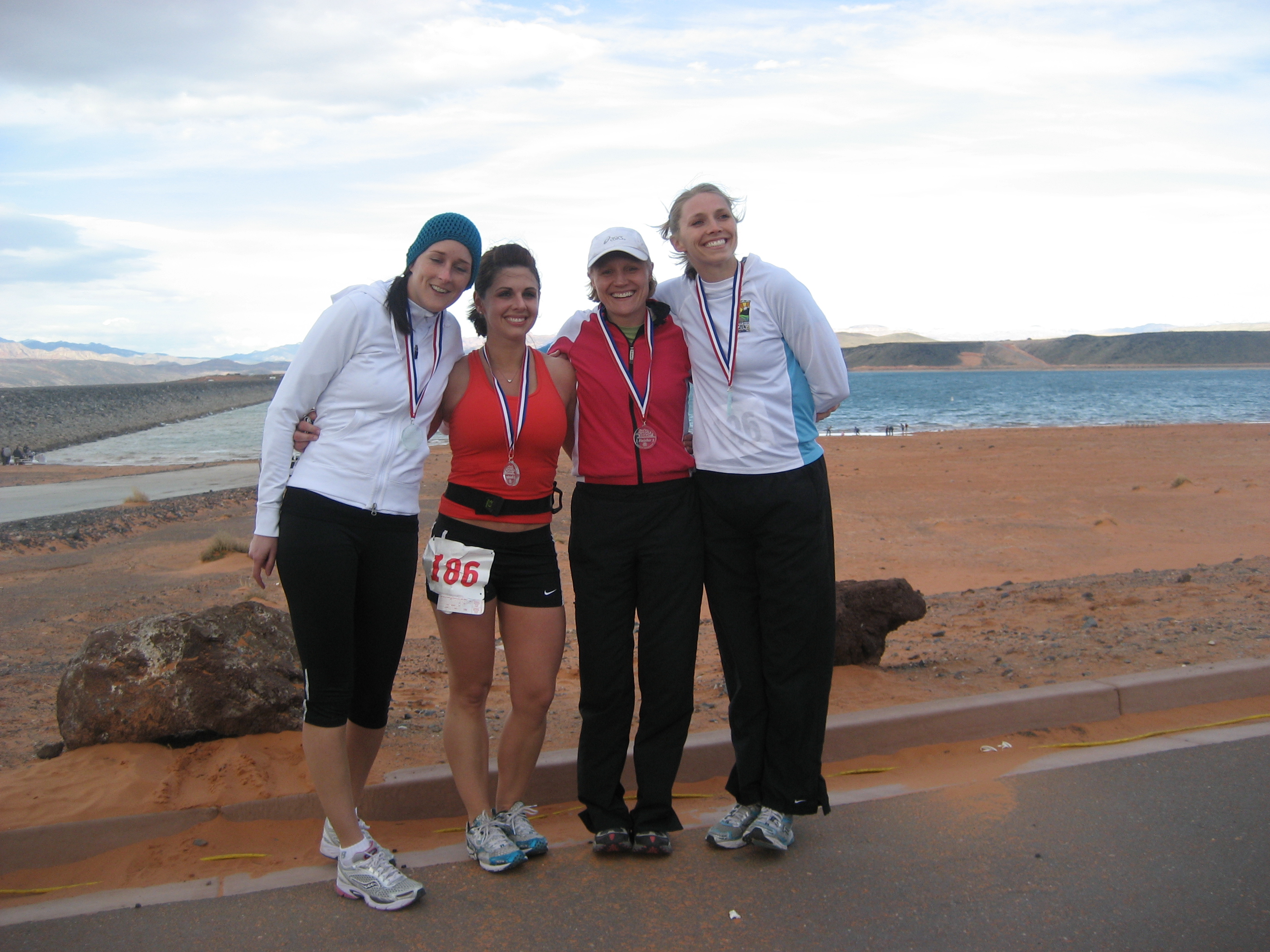 All-in-all we had a great time supporting and cheering for each other and others (go Red Rock!) .

We didn’t see much of the men after the third exchange as they were very speedy and did awesome with a 3rd overall place finish. They were so sweet to wait for us at the finish line (serious hours). I feel so lucky to be among such amazing people. The awards dinner was especially fun after to talk to all our local friends. So, if you are looking for a fun adventure with friends that love to run, you might want to check out the Lake to Lake relay. It’s a blast!  Just think you may even want to join in Natalie’s victory dance.  (sorry it’s sideways) 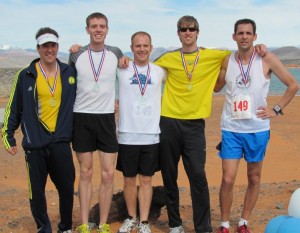 The SDRR Men’s Team was 3rd over all!  Go Team!